St Anne’s College, Oxford, in collaboration with CEMS, welcomes applications for a new Plumer Visiting Fellowship in Early Modern English Literature, to be established in perpetuity. The Plumer Fellowship is a non-stipendiary research position designed for established academics (of any nationality and institution) who wish to be temporarily resident in Oxford. The fellowship is available at any time of year, though would preferably be taken up during an Oxford term, and can last anywhere from 1-3 months. The Fellowship carries no responsibilities beyond giving one lecture in college during the duration of residence.

While the fellowship carries no stipend, the college will provide five lunches and/or dinners per week, full free use of the University of Oxford’s libraries, shared office space, Senior Common Room membership (free tea and coffee, newspapers, journals), and free printing and photocopying facilities. Fellows will also be invited to attend formal college dinners and early modern seminars and lectures around the university. In addition, the college can sometimes provide accommodation at a substantially below-market rent. Fellows are asked to be resident in Oxford for the majority of their time in post.

Applications for the Fellowship are brief and easy; they consist of a CV and a short statement detailing the research the candidate wishes to undertake while in Oxford. Applications are now open for fellowships starting in the 2020-1 academic year onwards. In the first instance, could interested parties please contact Dr Robert Stagg (robert.stagg@st-annes.ox.ac.uk) to discuss a possible application? Ladan Niayesh is Professor of Early Modern Studies at the Université de Paris and a member of the LARCA research centre (UMR 8225, CNRS). She is a Honorary Research Associate with TIDE and a Visiting Fellow at Exeter College over Michaelmas term 2020. Her research focuses on early modern travel writings and travel plays in English, with a special interest in travels to Muscovy and Persia. Her latest book-length publications include Three Romances of Eastern Conquest (MUP, 2018) and Eastern Resonances in Early Modern England: Receptions and Transformations (Palgrave Macmillan, 2019). Her forthcoming projects are a co-edition, with Kurosh Meshkat and Alasdair MacDonald, of documents related to the diplomatic missions of the Sherley brothers to and from the Sophy of Persia (contracted to the Hakluyt Society), and a monograph on Models of Race and Empire in Early English Accounts of Russians and Tatars (contracted to CUP). For the TIDE project, she will be organising this Autumn a set of online seminar sessions on “Polyglot encounters in early modern English narratives of distant travels”. Hannah Crawforth is Senior Lecturer in Early Modern Literature at King’s College, London, and a Plumer Visiting Fellow at St Anne’s College, Oxford. She received her PhD from Princeton in 2009. She is the author of Etymology and the Invention of English in Early Modern Literature (Cambridge, 2013) and co-author of Shakespeare in London (Arden, Bloomsbury, 2015). She has edited essay collections on Family Politics in Early Modern England and Shakespeare’s Sonnets: The State of Play, as well as a collection of new poems responding to Shakespeare’s sonnets. She has published widely on topics in early modern poetics including the work of Spenser, Jonson, Southwell, Greville. She is currently writing a book on Milton and Greek Tragedy. 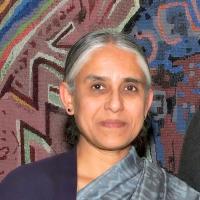 I’m an early modernist by training and primary inclination, but have researched in several fields, and am currently Professor Emerita in the Department of English, Jadavpur University, India, Mellon Global South Visiting Professor at TORCH, and Visiting Fellow at St Hilda’s College, Oxford. My current research project is provisionally titled ‘interrogating the global modern’, and I’m interested in the moment of the modern, the aesthetics of the modern, and the melancholy of the modern: as also in how this term travels and is translated between cultures. I have concurrent interests in early modern personhood and its contradictions, in travel and travellers, and in the relations between objects, persons and spaces. My most recent publication is the co-edited Commodities and Culture in the Colonial World (Routledge, 2018), but I have also edited a book on Petrarch, and published on Shakespeare and Spenser: essays on blindness and sight in Othello and shifts of identity in the Bolognese traveller Ludovico de Varthema are forthcoming. I have chapters in The Cambridge History of Travel Writing, The Cambridge Companion to Rabindranath Tagore, and the Oxford Handbook of Modernisms. I’ve led a number of interdisciplinary research networks, and engage with issues in the public sphere: most recently, I contributed an essay to Revue des femmes philosphes 4-5 (2018), Special Issue, ed. Divya Dwivedi, Intellectuels, philosophes, femmes en Inde: des espèces en danger. I’m finishing the Introduction for a new Arden edition of Shakespeare’s Measure for Measure, an edition of Jonson’s Volpone, and a book (with 17th century instances, but more from the 21st) called Cultural Evolution and its Discontents, due soon from Routledge.

My work could most kindly be called eclectic. A 1984 book on Shakespeare’s depiction of ambition was psychological mythography. A 1987 book on Jonson’s comedies focused on professional rivalries. The Rest is Silence (1994) meditated on 17th century English culture’s confrontations with mortality. Back to Nature (2006) was an ecocritical reading of that culture. Throne of Blood (2014) was a kind of culturally situated close reading of Kurosawa’s film adaptation of Macbeth. I’ve edited a volume of essays on Jonson and several of Jonson’s plays, and recently published articles on modern animal-protection sentiments as an accidental byproduct of early Calvinism, on other topics in the environmental humanities, and several on neologisms in Shakespeare and his theatrical rivals. Now I’m trying to combine old-fashioned close reading and textual editing of Shakespeare with new-fangled algorithmic methods, to identify the micro-structures that reinforce his dramatic art.

I’m in Oxford as the Fowler Hamilton Visiting Fellow at Christ Church. I’m looking forward very much to my residence in Oxford during Hilary Term 2019 as the second Plumer Visiting Fellow and to meeting colleagues at the Centre for Early Modern Studies. While at Oxford, I will be completing and revising chapters of my manuscript on how portraits of Queen Elizabeth I are informed by early modern medical constructs of female anatomy, virginity, and embodiment, focusing particularly on the “sieve” portrait group and on the material importance of pearl jewellery represented in Renaissance artworks.

In my research projects, I am interested in how the disciplines of medical history, literature, and art history intertwine and articulate a deeper sense of the culture within which portraiture is created. Some recent representative publications can be found in English Literary Renaissance, Studies in Philology, and Renaissance Quarterly, while other work focused on visual art of the Renaissance and Shakespeare’s interestingly early example of a tableau vivant is forthcoming in the Arden State of Play: Hamlet series. My earlier investigations include Shakespeare’s and artists’ portrayal of Ophelia, the relationship between early modern medicine and the device of the virgin’s bed-trick in Shakespearean drama, and a monograph on the strange and wonderful ways that female humoral ailment gets represented in early modern literature, from reviving hibernating women to blood-letter writing.

After a very short visit in 2014 for the Oxford “Blood” conference, I’m especially happy to make St. Anne’s my new home this upcoming term—to see several of the colleges’ private art collections firsthand and for the chance to lose many an hour in the Bodleian. I am delighted to be the first Plumer Visiting Fellow in English, and am greatly enjoying being a member of St Anne’s this term, with the opportunity this affords to talk with people from so many different disciplines – sciences and law, as well as arts and humanities. I have felt very welcome. Oxford’s Centre for Early Modern Studies has similarly felt like another second home; it has been extraordinarily difficult to choose between the many different talks in history, literature, music, law, and philosophy on offer on any given day.

My home institution is the University of Southampton, where I was Head of English and am now Emeritus. I have served on the academic committee of Shakespeare’s Globe, London, and on the Boards of Directors of the English Shakespeare Company, and Nuffield Southampton Theatres. I am a longstanding member of the AHRC Peer Review College— a panel member and chair, and a Strategic Reviewer.

The research and writing that I have been doing this term, including an article on the use of Shakespeare in a US programme for military veterans suffering PTSD, is contributing to a large project on the conceptual, creative, and cognitive importance of repetition and, within that, a more polemical piece on the vital social importance of ‘applied’ arts.

My talk at St Anne’s on Tuesday 13 November, entitled ‘Moving the Passions: Musical Poetics in Early Modern Europe’ is about how theorists and practitioners in both music and poetry in different parts of Europe in the sixteenth and seventeenth centuries used their understanding of classical rhetoric, including repetition, to think about the ways in which words and music (whether separately or together) both convey and evoke meanings and emotion.