In October 2017, Professor Katherine Ibbett joined Trinity College as the Caroline de Jager Fellow and Tutor in French. Here she tells us a bit about herself and her career:

Having studied at Oxford as an undergraduate, you are now returning as a Professor; how does it feel to be back and how much do you think has changed? 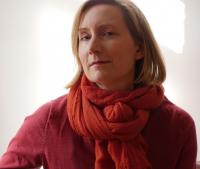 Well, mostly I’ve changed: I’m happier at 44 than I was at 19! So mostly I feel a little tenderness towards my younger self, mixed with thankfulness to have been able to learn so much from working in other places. Institutionally, there are some ways in which not much has changed, and that’s enraging. But there are also great developments: more talk across the humanities, via TORCH and things like CEMS; more women in senior roles; more of a sense that Oxford should think about its place in the world, both historically and today, and not retreat into a bubble. I’m grateful to all the people who’ve been working to change the place, and to make it somewhere I want to help out with that work.

What first sparked your interest in the early modern period and what influenced you to pursue an academic career?

I did English and French for my BA mostly because I cared about modernism. Milton nearly made me drop out. But I had great early modern teaching on both sides – Tony Nuttall, Wes Williams – and through that I came to love the bumpiness of early modern genre, and especially the unwieldiness of the early novel. The early 90s were exciting years for early modern scholarship, too: in my final year, I read Lorna Hutson’s The Usurer’s Daughter, and splashed it all over everything I wrote.

My mum taught English at a polytechnic, teaching students of all backgrounds and ages. She often came home sighing about cuts but as often laughing over things that had happened in seminars, and I’m probably an academic because of that early sense that amazing things happen when you gather very different people together to talk about books. I am very glad my first experience of HE was what’s now called a post-92 – there was a political energy to it that was a lasting influence.

Influence also suggests inspiration, and I got plenty of that in Berkeley, where I did my PhD with Tim Hampton, a dazzling reader of early modern texts as well as a patient reader of his students’ efforts. But I also got frequently disheartened (not by Tim; I carried my own internal disheartener). So perhaps the largest influence was that of the brilliant women in French studies who persuaded me I should make a go of it even on the uninspired and intimidated days: Ann Jefferson, Susan Maslan, and, in my first job, Peggy McCracken. I still go back to them for a top-up now and again. Your most recent book examines compassion in early modern France; what do you find attractive about the history of emotions, and do you think its increasing popularity as a discipline can tell us anything about our own historical moment?

I don’t love a lot of the theorizing in history of emotions, which I find a bit clunky in its approach to rhetoric. In contrast, I have enjoyed how some emotion work in literary studies (which might not label itself as that) has got me to rethink familiar forms and modes. A good example of work like that is Leah Whittington’s gorgeous book on supplication rhetoric; and, in the last few days (the hap of Weston café encounters) I’ve been talking to David James about his work on forms of solace in contemporary writing. Though it’s been a field dominated by historians, emotion studies have brought out the literariness in the ways I work. They’ve also returned me to an interest in gender that hadn’t come to the fore in my earlier work: I just wrote an article about the gendering of fake emotion in Montaigne.

As for the historical moment: oh, yes! It’s no accident that emotion and affect talk has been on the rise since 9/11. And a seventeenth-century language of failed compassion first jumped out at me because of Bush’s speeches on compassionate conservatism. I’ve noticed more people working on anger, in the last year. I can see why. For me thinking through the emotions of the past has been a vital way to make sense of, or sometimes just suffer, the present.

Your next book, Liquid Empire, is a study of ‘the writing of water in early modern France and its territories’; can you tell us more about this project?

It’s a scholarly version of Huck Finn, about rivers and their inhabitants and instrumentalisers: nymphs, canoeists, poets, engineers. If sea studies from Braudel to Gilroy got us to see large historical networks, I wanted to think instead about the different scales and narrative forms of the river, and what we would learn from following them. I think it will open and close with French American material – Cartier and the Saint Laurent, La Salle and the Mississippi – and there I’m very interested in Indigenous technologies, like canoes and the management of water more generally. The French section, in between, is about the place of rivers in lyric poetry, in political metaphor, in the early novel, but also in debates about engineering:  right now I’m trying to write about buoyancy and things that float down rivers, from bodies in the Wars of Religion to love letters in prose romance. I’m not sure how it’s all going to fit together; for now, I’m just having fun paddling.

Do you consider yourself more of an historian or a literary scholar? How do you think the two disciplines of Literature and History ought to interact?

I’m a literary scholar who operates historically. Often the work I get most excited about is by people who are in history departments, but I am increasingly persnickety about poetics in ways that disrupt that. And when I am in, say, a reading group with historians, I often realize how very different my training has been. I think the two disciplines ought to interact often, vigorously, over bottles of wine, and that they should widen the conversation beyond that old binary, too.

Your career has taken you to a number of research institutions around the world; do you have a favourite library? This is the hardest question: it makes me want to go back to them all to do a quick review, though getting to know the overhauled Oxford libraries is quite enough for now! Probably it’s a tie between the Mazarine in Paris for its pamphlets and its proximity to some enticing shops, and the Bibliothèque nationale for its calmly isolating distance from such enticements. A shuttle between the two makes for the ideal Paris stay. For more specialised materials, a recent love is the John Carter Brown library in Providence, RI. Anyone working on the early Americas, even tangentially, should look into their fellowship program: the help you get from curators and other readers is extraordinary.  And for any institution thinking about how to acknowledge its ugly history and especially its profits from slavery, the JCB’s use of its collections to address that history and to widen and diversify public access to elite institutions is exemplary.